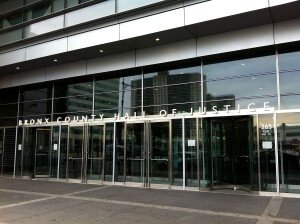 “Front of Bronx County Hall of Justice on 30 June 2012” by Photographer Christopher Le, edited by Blurpeace – Own work. Licensed under CC BY-SA 3.0 via Wikimedia Commons.

The Bronx County Hall of Justice opened in 2007 at 265 E. 161st Street, Bronx, NY. This “mega courthouse” is one of the largest courthouses ever built in the United States at 10-stories tall and 775,000 square feet. It includes 47 Supreme and Criminal Courtrooms, seven Grand Jury rooms as well as ample office space for the Department of Corrections, the Department of Probation, the Bronx District Attorney and other criminal justice agencies.

This state of the art facility replaced the old courthouse – the Bronx Supreme Court – used solely for felony matters at 851 Grand Concourse. The new Bronx County Hall of Justice, however, hears both felony and misdemeanor cases within its halls allowing for a more one-stop shop in legal matters. Prior to the opening of the Bronx County Hall of Justice, all misdemeanor cases were heard at the Bronx Criminal Court building located at 215 E. 161st Street. This building still hears all Criminal Court arraignments during the day from 9 am -5 pm and the night arraignment shift from 5pm-1 am. The old courthouse is still used for civil matters.

The Bronx County Hall of Justice doesn’t skimp on safety. At the building’s entrance you’re greeted by 10 magnetometers and X-ray machines. Eight courtrooms have audio and video recording and evidence presentation capabilities. Bullet-resistant glazing is used in the lobbies and judges’ areas to keep both governing authorities and visitors safe. Further, all glass exteriors are above street-level, especially along circulation routes. Even the public plaza is blast resistant, as are the loading dock and mail room structures.