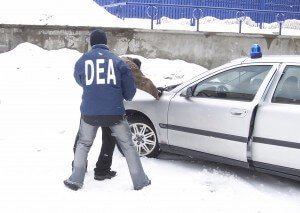 In New York, drug crimes are prosecuted according to the severity of the crime, the class and type of controlled substance, the intent behind the crime, and the number of prior violations for the accused. In cases where there is only possession without any intent to deliver the controlled substance, or misdemeanor class crimes, the penalties can bring high fines and up to one year in jail. Prison sentences are frequently the norm for felony class crimes involving not only possession, but intent to deliver, distribute, and manufacture controlled substances like cocaine, heroin, LSD, hallucinogens, and amphetamines.

These substances include but are not limited to marihuana, cocaine, depressants, stimulants, hallucinogenics, and others as noted in Article 33 of the New York State Controlled Substances Act.

If you or a loved one have been charged with a drug crime of any kind in New York State Contact Drug Crimes Defense Attorney Troy A. Smith by phone at (212) 537-4029, , or use the contact form HERE.

Some of the drug crimes that Mr. Smith is skilled in defending include:

The sentences imposed for felony drug crimes for all classes include prison time. Felony drug crime sentences carry a provision called ‘indeterminate’ sentencing; which means that the judge will determine the sentence based upon the severity of the crime and the prevailing evidence against the accused, but at no time will the sentence fall below a specific time period for imprisonment.

According to the New York Penal Code Section 70.00 to 70.85 felonies ranging from Classes A to E will receive an indeterminate sentence of no less than one year, up to and including life imprisonment.

Under no circumstances should a defendant accused of one of these crimes attempt to defend themselves. Contacting an experienced criminal defense attorney like Mr. Smith is a necessity if you have been charged with a drug crime of any kind in New York State, Drug Crime Defense Attorney Troy A. Smith can be reached by phone at (212) 537-4029, , or use the contact form HERE.